I’ve got to admit, I got a couple butterflies in my stomach the night before while sleeping under a full moon looking up at the menacing northeast face of North Maroon Peak.  This is one of the classic ski mountaineering climbs and descents in Colorado due to the exposed line you have to take down the face as you wind through a series of cliff bands.  I had originally posed the idea of climbing the bell cord between Maroon Peak and North Maroon and possible hitting both peaks in the same weekend, but as Winter dragged on through Spring that wasn’t looking all that feasible.   North Maroon it was. 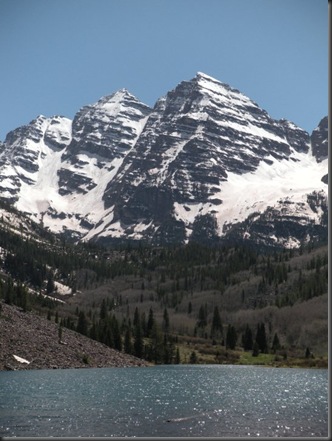 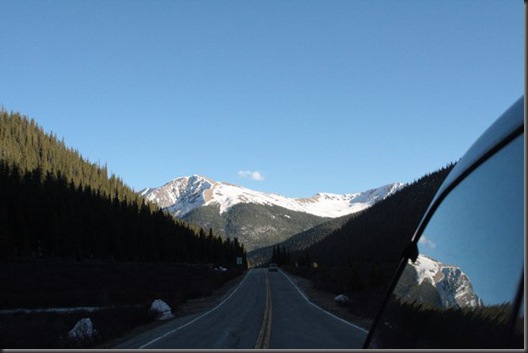 Photo: Kai Erspamer
Chris, Jon, Kai and I loaded up in my suburban with a ton of gear in the back and headed over Independence Pass that had just opened the day before.  I had never been over the pass before and was in for quite the treat with some hairy switchbacks and waterpark-esque thrills as we ripped across some snow melt that flowed over the road.
After dropping of Kai at his house for the night, Chris, Jon and I headed up the road to Maroon Lake after grabbing some Johnny Macguires.  We found a pretty empty parking lot and snagged a spot in the overnight lot and loaded up. 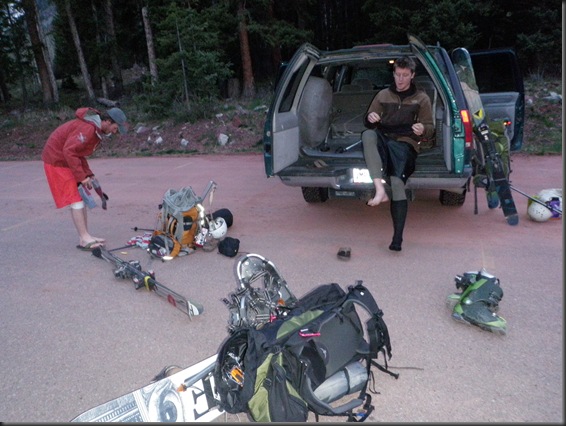 Even in the dim sunset, the Bells loomed over everything in the valley.  And I thought Pyramid was ominous… 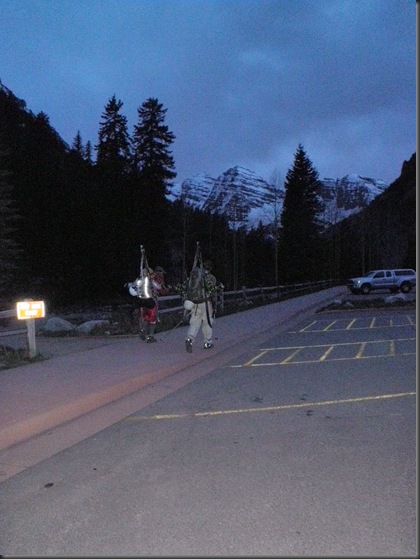 A quick hike, about 2.5 miles, led us around Maroon and Crater Lakes to Minnehaha Gulch where we slept in a small meadow under a gorgeous full moon that lit up a spectacular backdrop.  A rabbit stalked us into camp and Jon aptly nicknamed him Bunnicula because of his red eyes before scaring him off. 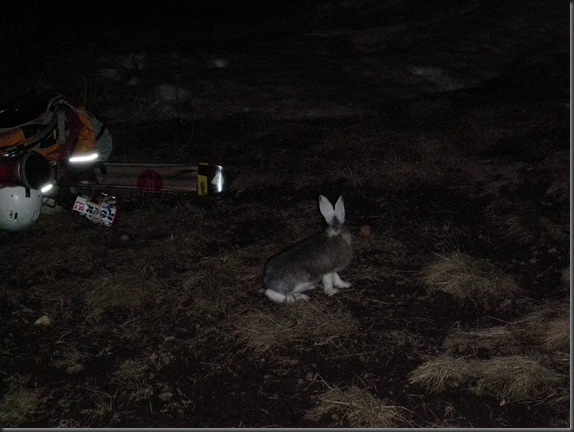 My simple watch alarm went off at 3:45 AM and we all woke up and were ready to tackle the mountain at 4:30 AM.  One of the most mentally taxing parts of the whole climb was simply getting across the stream in Minnehaha Gulch.  Its much easier said than done with 50-60 lb packs and headlamps. 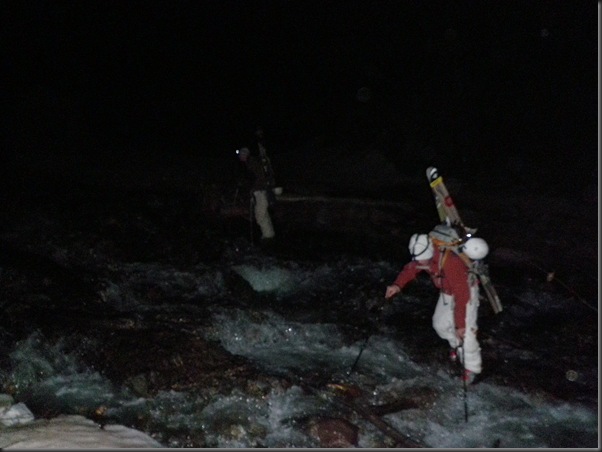 Once across, we boot-packed up a solid snowfield to the top of a small ridge and found ourselves on the bottom of the Maroon apron.  The sun was rising to reveal the details of our route.  We discussed our potential moves and headed right towards the entrance couloir. 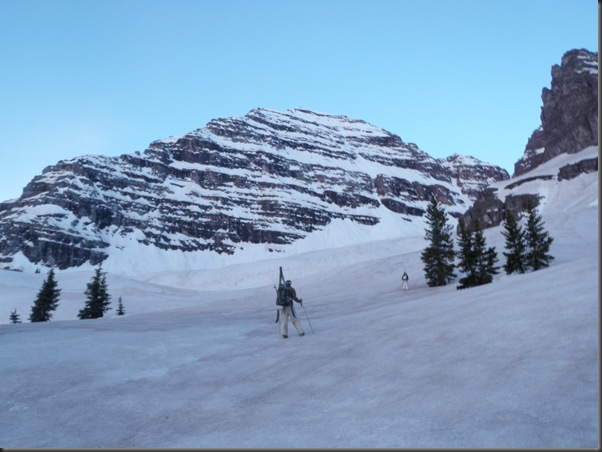 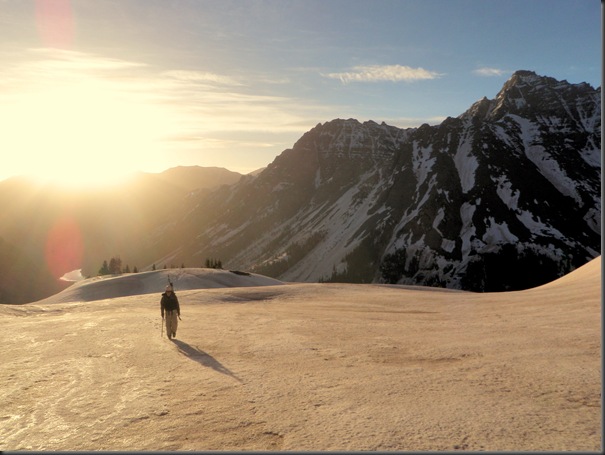 After snapping a few shots of Jon and Chris above Miner’s Ski Jump my camera battery conked out and was left making mental pictures of the rest of the climb and descent.  Luckily, Jon’s camera made it through the whole day.… 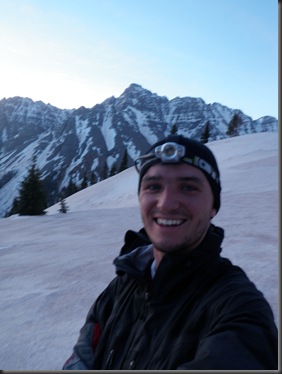 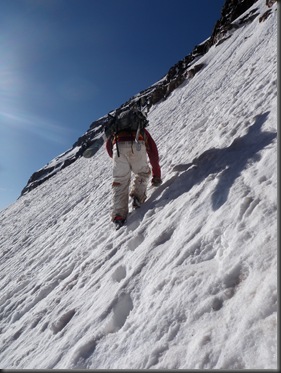 Needless to say, our route took us across some very exposed snowfields between cliff bands as we winded our way to the summit.  Some hard ice provided quick routes to the top with crampons and ice axes gripping pretty well the whole way up. 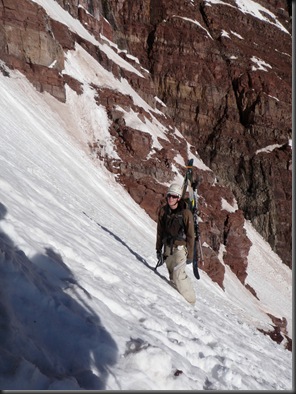 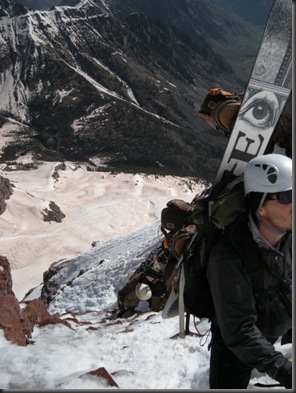 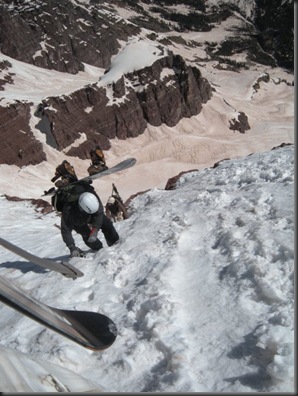 Getting around the Punk Rock Band far looker’s left proved to be a little technical bouldering with crampons.  The drop below fell more than 1000’ to the left between the Bells and a cumbersome snowboard didn’t make life easier when crossing rock in crampons. 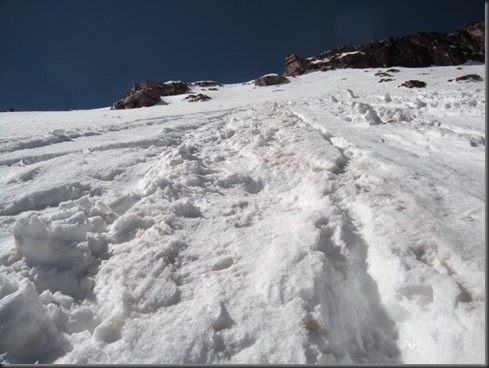 Photo: Jon Jay
A short hike to the summit exposed an amazing view of the surrounding peaks.  Capital and Snowmass, Castle and Conundrum, were all in sight with Pyramid and Maroon Peak sitting as close neighbors. 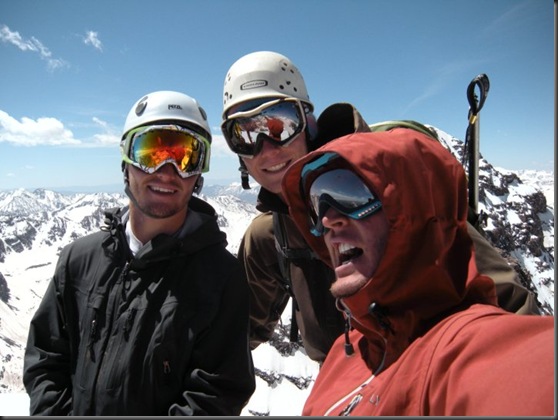 Photo: Jon Jay
I swapped out mountaineering boots for snowboarding boots for the ride down.  We took a summit shot and were on our way down.  Each of us had to down climb the tricky way around the Punk Rock Band again as we handed our gear down one by one.  Then it was easy to follow our route up back down as we picked our way through corn snow and ice.
The crux of the climb was unsuitable to ski so we looked for another option and found a small chute that broke through a rock band that Jon and I straight-lined and Chris down-climbed.  I don’t blame him after Jon took a short tumble after hitting some ice after his landing.  Check out Jon’s POV footage of the descent here.  Also check out his blog post about the trip here.
After this tricky section we were home free to the entrance couloir and some pretty nice turns before getting back to Minnehaha Gulch where we filled up with water and hit the trail home.  Every person on the trail down looked at us like we were absolutely nuts to even try something like that but were all duly impressed we made it.  A few tourist shots from Maroon Lake capped off the day and all of our ski seasons.  Until next year, I’m packing up the board and hitting the beach….psyche, I’m heading to Dunedin, New Zealand in a month where it is still Winter and can ride for a full year, lucky me. 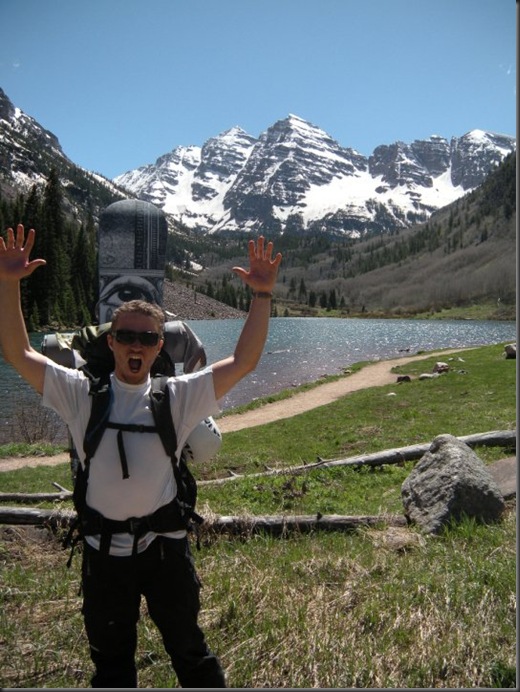