Jim Hansen is the man, and so are his muppets.  I loved the muppets as a kid and turns out they’re still popping into my head.  I couldn’t get the image of the Snuffaluffagus out of my head last Saturday as I climbed Mt. Sneffles.  The muppets are cool and all, but I’ve moved on to other interests.  Mt. Sneffles is a spectacular mountain.  It rises above Telluride and Ouray in the San Jauns Mountains like the Eiger.   A couple good buddies made the 8 hour pilgrimage to southwest Colorado to take on the mountain for a challenging climb and rewarding snowboard descent.  Check out Jon’s report on his blog. 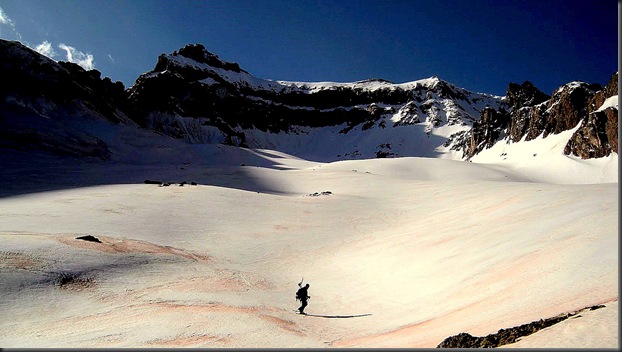 Jon generously drove the long trip, Chris snagged shotgun and I was left with the jump seat in the back of Jon’s pickup.  After stopping off to grab some crampons and rappel gear, we hit the road with the pickup bed looking like we had just dropped our life savings at REI scattered with skis, backpacks, ice axes and snowshoes.
Once we reached the trailhead, the Dallas Divide ominously loomed as it dominated the southern horizon.  The sun was setting quick and we got a move on to find a place to sleep in Blain Basin.  After a tricky creek    crossing   with 80 lb pack on, we apparently  took a wrong turn and spend the next couple hours going back and forth on the wrong trail.  At midnight, all very tired, we called it a night and threw out our sleeping bags to sleep under the stars in an open meadow. 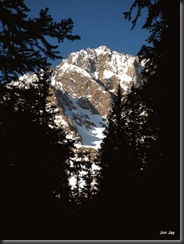 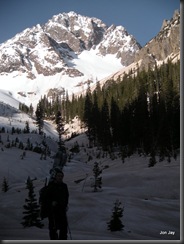 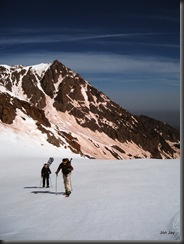 *All Photos by Jon Jay


The next morning we backtracked to the creek and found a very visible sign pointing to Blain Basin….Great.  Snow covered parts of the trail but some old skin tracks provided some solid snow to walk on.  We hiked in the shadow of Sneffles and the Dallas Divide until we finally reached a clearing that revealed an expansive Blain Basin with Mt. Sneffles protruding into the heavens behind around 8:00 AM.
Jon and Chris slapped on their skins and I, for once in my life, kicked their butts on my snowshoes as they dealt with a load of snirt (snow-dirt)clogging up their traction.  We got a good view of the Snake Couloir that wrapped along the Northwest side of the mountain that promised a thrilling descent later in the day.  Moving on, a long and tiresome path through the basin led us to the bottom of the Lavender Couloir on the east face of the mountain.  This would be our straight shot to the top…we strapped on crampons and unloaded our axes to tackle this simple but lengthy snow climb.  Jon provided a nice bootpack to follow. 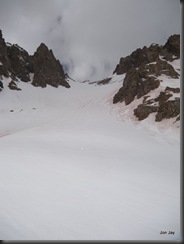 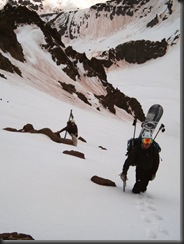 On top of the south col, the wind howled and nearly blew me over with my board acting like a sail above my head.  Forecasts were accurately predicting 80 mph gusts at the top but it was still turning into a gorgeous warm day.  After a quick break at the saddle, we eyed the final trough to the summit.  The short climb to the top revealed a sudden drop onto the north side of the mountain; a route around to the left put us on the summit. 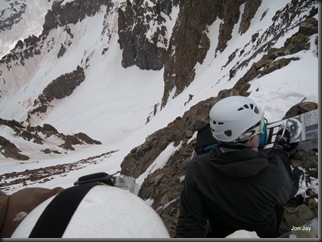 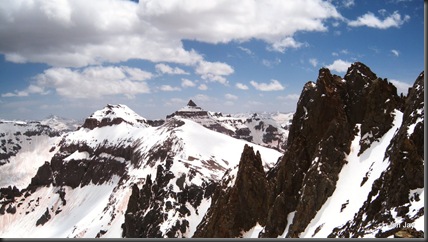 The view from the top is one of the most beautiful I have had in Colorado.  The San Juans are an artistic masterpiece that owes something to the glaciers that created them.  Telluride was visible to the West, Ridgeway to the Northeast and the Dallas Divide seemed to buttress the whole mountain to the Southeast. 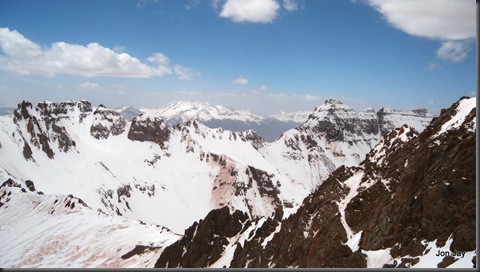 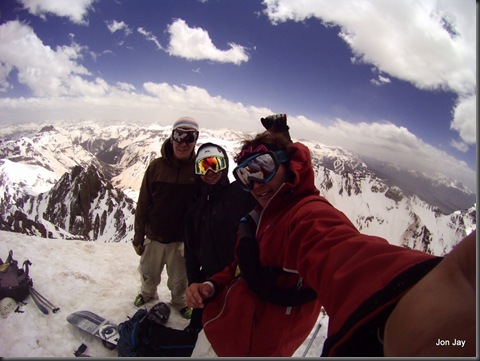 After some reminiscing on the climb, the three of us prepped the rappel off the summit anchor into the Snake Couloir.  Jon grabbed the rope from my pack and Chris was the first to descent the 90 ft drop.  I got a chance to use my rarely-out-of-the-closet harness and hopped down the face second with Jon bringing up the rear.  With all of us safely in the couloir, Jon pulled the rope through and we loaded and strapped up for the  descent.  Check out Jon’s POV footage of the whole thing here.
The snow was a bit choppy in places but the terrain was stunning.  Snow got better as we entered the high walled section and took turns ripping down the chute and out onto the snow apron of Sneffles.  Safely down and at the bottom of Blain Basin, we looked back and appreciated the great day.  I hope to be back here again as this mountain is absolutely gorgeous.
Back to Denver  to prep for finals and hitting Maroon Bells next weekend.