Sand and Volcanoes but Not Hawaii

This one was in the middle of nowhere.  Megan convinced me to go to Wheeler Geologic Area based on a couple of pictures we had looked at online (which admittedly looked pretty cool) but we had no idea where it really was.  Anyone ever heard of Creede, CO?  Me neither.  But 10 miles up a dirt road and 7 miles along a hike there exists a ridiculous formation of rocks that has no business being in the middle of the forests of Colorado.  We camped out at the trailhead on Fri. night and took off at a leisurely 9:00 AM on a trail that meandered its way across some beautiful country before meeting back up with the 4WD road near the geologic area.  Along the way we spotted some of the usual mountain critters and even stumbled upon a beaver dam that could only be described as mansion-esque. 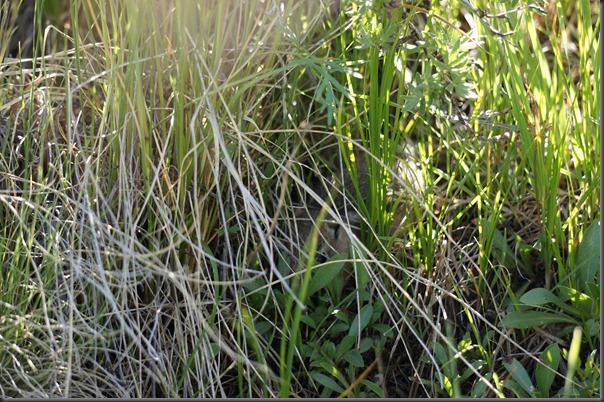 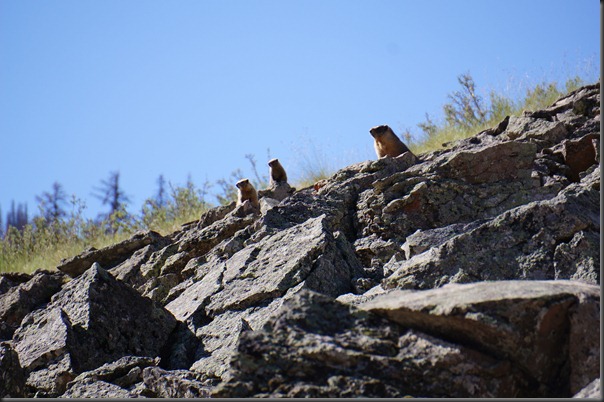 This trip was also the first chance either of us had to experiment with the new camera
(Sony NEX 5) that we had bought off Megan's dad.  The quality of pictures and ease of shooting them did not disappoint. 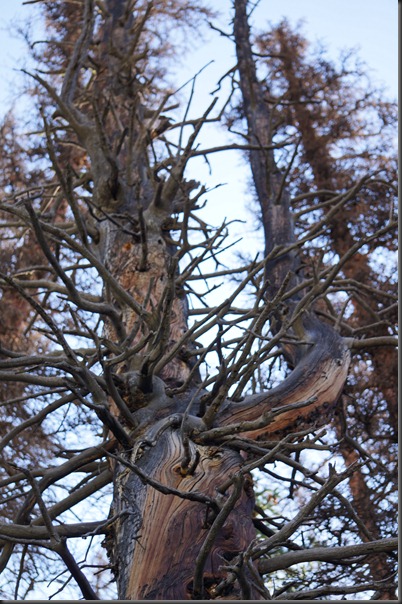 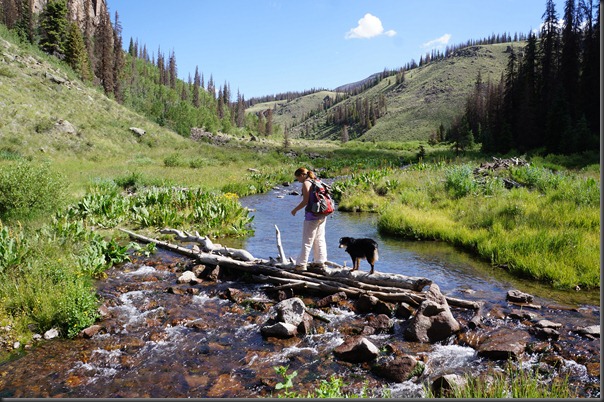 Somehow both Megan and Leo managed to cross here without a drop of water on them but I wasn't so graceful.  Leo, however, would get plenty wet later in the trip. 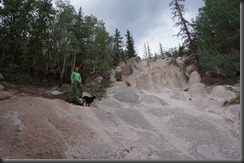 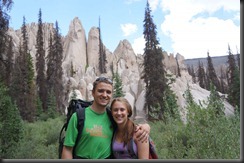 After a long morning of trekking, we arrived at a parking lot for the geologic area and to my surprise there were actually a few cars who had beaten us there.  They had taken the 14 mi 4WD road that supposedly took just as long as the 7 mi hike and were the first signs of other human life we had seen all day.  Another 1/2 mi walk past the parking lot and we were skirting along the base of some crazy looking rocks that jutted up higher and higher along the hillside.  Most of the spires were formed from volcanic tuff that was deposited here by volcanoes in the area millons of years ago.  The material has since been exposed to erosion that stripped away much of the sandy like ash and has left the solid rock standing upright.  All of this according to the Los Alamos Geological Club who we met at the base of the rocks.  I took them for their word but in the back of my head I couldn't help but think that a lot of the rocks were probably just Dragon Eggs.

After a yummy lunch, we both thought it'd be smart to hitch a ride back to the trailhead instead of make the hike with looming thunderclouds rolling in.  The folks from the Geological Club were super nice to give us a lift.

That night we opted to stay in slightly more comfortable accommodations (but not by much) at a motel in Alamosa.  After a good night sleep, we were ready to tackle the Great Sand Dunes National Park the next day. 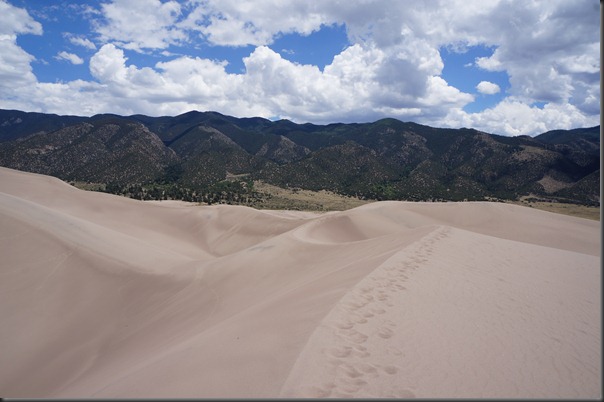 We had kind of a late start but we made it up to the dunes parking lot by 12:30 and set foot on the sand.  Leo made it about 10 feet before whimpering and retreating to the shade of some nearby bushes.  The sand was scorching hot and nearly unbearable without closed toed shoes.  Megan and the puppy dog stayed behind in the cool shade while I attempted to run the tallest dune.  Mark Gram would be proud of my workout habits. 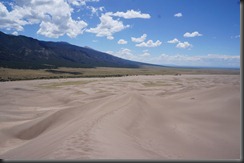 It took about 30 or 40 mins of taking a step and sliding down half a step but I finally got to the top and enjoyed the view down below.  Over the backside you couldn't see much but the next dune over but the view down to the San Luis Valley was spectacular.  Eventually I had snapped enough pictures for a good panarama or two and jogged down a spine all the way to the valley floor. 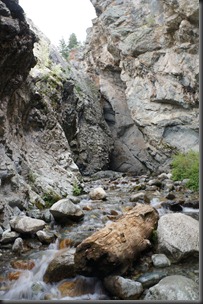 For a little relief from the hot sand Megan and I decided to check out Zapata Falls up the road to cool off.  The 1/2 mile in wasn't too spectacular but the 100 yard trek through the frigid creek woke us up pretty fast.  Leo also got his fair share of freezing water on his hot paws until I had to carry him through some of the deeper water up to the falls.  The actual waterfall was tough to capture with the camera without soaking the lens but we managed a couple other shots before frostbite set in. 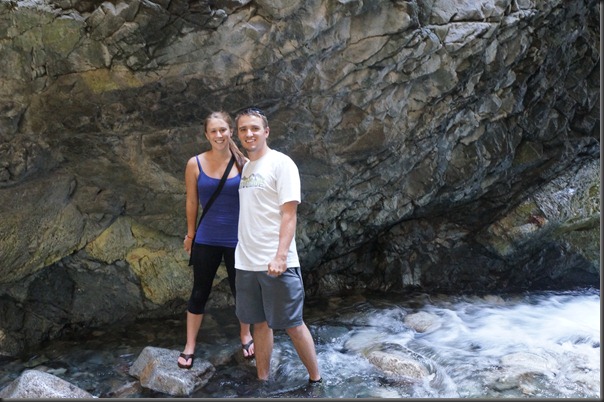 It was a pretty aggressive two day weekend trip but we had an awesome time and got to see some of the more unusual Colorado attractions.  While on the drive out of the valley, I couldn't help but stare down the Crestones (seen below) as they towered above the sand dunes and taunted me for the failed ski mountaineering trip in the Sangre de Cristos last year.  An awesome weekend, awesome girlfriend for putting up with me hogging the tent, awesome puppy dog for putting up with hot sand and frigid water and some more awesome outdoor adventures. 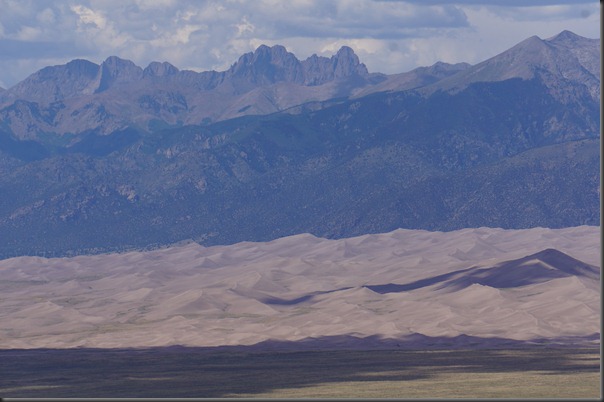 One of the new interns at work suggested we all go indoor skydiving during our lunch break.  Apparently my flying form sucked and spun me all over the place but it was a pretty fun break from work.